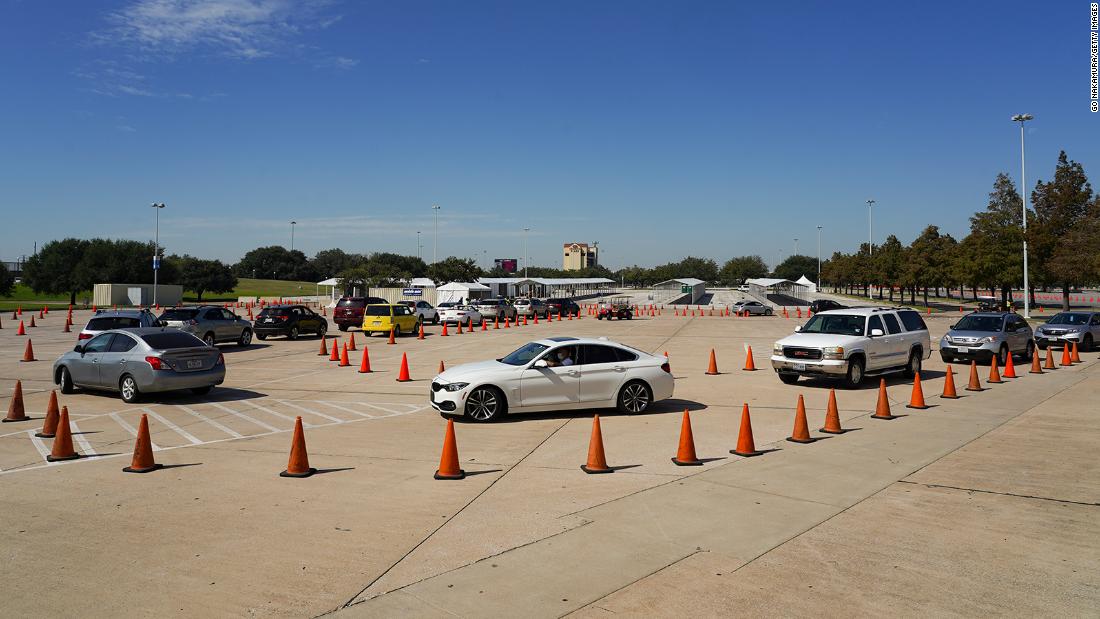 Washington (CNN)The Houston-area county at the center of a legal fight over drive-thru voting decided late Monday to close nine of the 10 polling places that the county had used as drive-thru voting locations.

Earlier in the day, a federal judge had rejected a GOP request to invalidate 127,000 ballots cast in drive-thru early voting but said he would have ruled against allowing such voting on Election Day. The judge had dismissed the petition on technical grounds after finding the Republicans did not have a legal basis to bring the challenge.
In announcing the decision to close most of the drive-thru locations, Harris County Clerk Chris Hollins said on Twitter that he “cannot in good faith encourage voters to cast their votes in tents if that puts their votes at risk.” The location that will remain open is the Toyota Center, which has “walls and a roof” and would fit the judge’s description as a building, a county clerk spokesperson told CNN. The judge had ruled that voting needed to take place in a “structure.”
Just before Hollins’ announcement, Republicans challenging voting in Texas’ Harris County had asked a federal appeals court to block drive-thru voting on Election Day, after losing a bid earlier in the day to invalidate all drive-thru voting in the Democratic-leaning area, which includes Houston. A panel of judges from the 5th US Circuit Court of Appeals denied that request early Tuesday morning.
In their appeal, the Republicans dropped their request to invalidate the ballots already cast but left open the door to doing so later.
The lawsuit seeking to void the 127,000 early votes was a major last-minute challenge to voting rules in closely watched states ahead of the election, in which some officials have made special accommodations amid the coronavirus pandemic.
“When you balance the harms you’ve got to weigh in favor of that – in counting the votes,” Judge Andrew Hanen ruled earlier Monday after a nearly three-hour hearing. The judge noted that people have been voting using the drive-thru tents since mid-October and the petition to invalidate those votes was filed only late last week.
Hanen, an appointee of President George W. Bush, rejected the Republicans’ arguments on a technical matter but also said he would have ruled against them since the lawsuit was filed well after thousands of people had voted.
Sunday, the all-Republican Texas state Supreme Court denied a similar petition on drive-thru ballots. Roughly 10% of the votes cast in-person during the early voting period have been cast at those sites.
In a separate case in Nevada on Monday, a judge rejected a Republican lawsuit seeking to halt early counting in Clark County, which includes Las Vegas, over the stringency of signature-matching computer software and how closely observers can watch votes being counted.
President Donald Trump and Republican officials have repeatedly made baseless claims of voter fraud and sought to cast doubt on measures including voting by mail and the use of dropboxes.

Throughout the hearing in Houston, Hanen appeared to grapple with the idea that nearly 127,000 people had already voted in the drive-thru polling centers and whether, if he invalided the process, they would be able to vote on Election Day.
“A lot of people would say, ‘Gee, if I had known there was a question about voting drive-in, I would have parked my car and walked to the polls,'” Hanen said.
Reading his ruling, Hanen noted that the case may be appealed to the New Orleans-based appeals court, and suggested that were it returned on appeal, he may move to stop Harris County from offering drive-thru voting on Tuesday.
Hanen said Texas election law requires ballots to be cast inside a building, and, “I don’t find a tent to be a building.”
“I would not vote in a drive thru out of my concern whether that’s legal or not,” Hanen said, ordering Harris County to maintain records of ballots cast at those sites on Tuesday in the event of future legal challenges.
The judge later issued a written order further explaining his reasoning.
Hollins had earlier said drive-thru voting will continue on Election Day.
“We will have drive-thru voting open tomorrow. We will count those votes. And we want to make clear that voter access in Texas and in America is a constitutional right that we will protect,” Hollins said after the hearing.
“We will give voters on Election Day the same rights, the same conveniences that every other voter has had during the early voting period,” Hollins added.
During the hearing, Christina Ford, an attorney representing Democratic parties that intervened in the case, emphasized the potential difficulty to voters who cast their ballots to try and cast a new one.
Ford said that provisional ballots do not have a check box on them to reflect that the voter had cast a ballot at a drive-thru location and that if a voter is found to have intent to vote twice it is a criminal offense.
Voters relied on county officials, Ford said, and invalidating their ballots would “cause mass confusion” and create a “frantic situation with voters trying to figure out if they could cast a provisional ballot.”
Texas Democratic Party Chair Gilberto Hinojosa said the lawsuit never should have been brought in the first place.
“Texans who lawfully voted at drive through locations should have never had to fear that their votes wouldn’t be counted and their voices wouldn’t be heard,” Hinojosa said. “This lawsuit was shameful and it should have never seen the light of day.”
Former Vice President Joe Biden’s campaign called the ruling a “victory for Texas voters.”
In a statement, the campaign’s Texas State Director Rebecca Acuña said: “Today is a victory for Texas voters and the more than 120,000 Texans who followed the rules, made a plan to drive-in vote, and exercised their constitutional right.”
The hearing began at 10:30 a.m. CT, but public access was limited at the start.
Reporters and other members of the public were granted access to a teleconference about an hour after the hearing began. A phone line that had been set up for access broke down as the hearing was about to begin. Reporters inside the courthouse were held in the lobby and not allowed into the courtroom due to social distancing measures put in place due to the coronavirus pandemic.
About 90 minutes after the hearing began, those reporters were eventually allowed into the courtroom.
Steve Vladeck, CNN Supreme Court analyst and professor at the University of Texas School of Law, said the lawsuit fits a broader pattern of GOP-led lawsuits claiming voter fraud.
“Like so many 11th-hour voting-related suits filed by Republicans in recent weeks, this suit has almost nothing to do with voter fraud,” Vladeck, who has intervened on behalf of the defendants, wrote in an op-ed published in The Washington Post.
“Rather, it’s the latest in a consistent and cynical line of suits — in Wisconsin, Pennsylvania, Minnesota, among others — that appear motivated by partisan gain, assuming that the exclusion of any set of ballots from Harris County … is good for Republicans.”

Judge is no stranger to controversy

Hanen was appointed to the bench in 2002 by then-President Bush and now serves in the Houston Division of the Southern District of Texas, which sits in Harris County, the state’s most populous county and a Democratic stronghold.
Hanen is no stranger to controversy. Back in 2016 he blocked President Barack Obama’s push to expand the Deferred Action for Childhood Arrivals program as well as another program aimed at parents of legal immigrants. At one point as a part of that litigation, he was infuriated by actions taken by lawyers at the Department of Justice, causing him to issue a 29-page order that began by quoting a scene in the movie “Bridge of Spies.”
Hanen also quoted from “Miracle on 34th Street” before concluding by ordering the attorneys who appeared in plaintiff states to go through a legal ethics course.
The case centers on 10 drive-thru voting locations Harris County set up for early voting, which ended Friday, and Election Day. The 10 locations are connected to traditional polling locations.
While curbside voting in Harris County is limited to voters with a disability and located at all polling sites, the drive-thru voting locations are open to all voters.
The federal challenge argues that drive-thru voting violates the US Constitution, which says state legislatures decide how elections are run. The plaintiffs also argued it violates the equal protection clause of the 14th Amendment, in that the county is adopting a manner of voting that has not been adopted by other Texas counties.
Jared Woodfill, a Houston lawyer representing the plaintiffs, argued that Hollins was acting on his own by implementing the practice of drive-thru voting, but Hollins has staunchly defended the practice of drive-thru voting, calling it a safe and legal option amid the pandemic that’s been repeatedly backed by the courts and election officials.
Before the hearing, Hollins told CNN’s Jim Sciutto on “Newsroom” Monday that should the nearly 127,000 ballots be invalidated, the county is going to use all available resources to reach out to the voters impacted by the decision.
“We are prepared to marshal all county resources, including emergency response technology, to reach out to 127,000 of the potentially affected voters,” he said. “We do have tomorrow, Election Day, and we’re going to do whatever we can to get them out there and make sure that their voices are heard and that their votes are counted.”
On Sunday, the American Civil Liberties Union and the ACLU of Texas, representing several people who used the drive-thru option in Harris County, filed a motion to intervene in the case on behalf of the county.
oy Davis-Harasemay, a 44-year-old Houston voter who is one of the Texans named in the motion, has “both asthma and spondylitis, a degenerative spine disease that makes her unable to stand for long periods of time,” according to the ACLU, which argued she would be disenfranchised if the votes are invalidated.
“The push to toss the ballots of nearly 127,000 Texans in Harris County is unconscionable and illegal,” Sophia Lin Lakin, the deputy director of the ACLU’s Voting Rights Project, said in a statement. “It appears to be an attempt to undermine a true and accurate vote count and improperly influence the outcome of the election.”
This story and headline have been updated with further developments Monday.