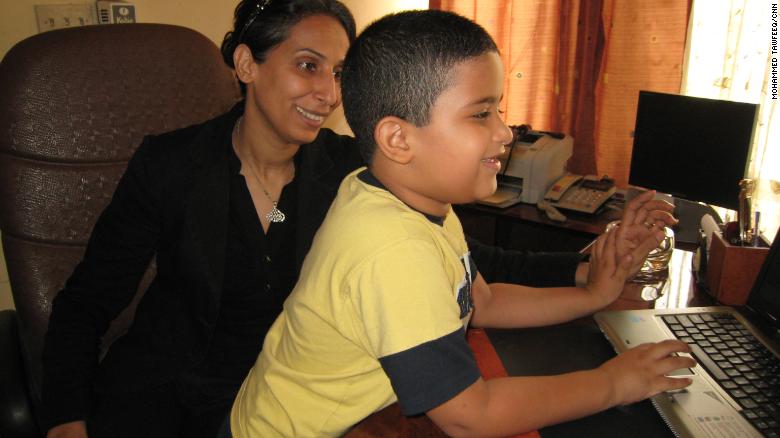 (CNN)Nahla al-Nadawi’s voice is filled with love as she gently asks her son why the flower he drew is black.

It pains her to have to ask that question. Ussayid, 19, has autism and struggles to verbally express his thoughts, fears, and pain. He does so through colors.
“We worked for years to get him away from the black of death,” she explains. “But this was his expression of his fear that I would die or that my husband who he considers as a father figure would die.”
Nahla and her husband Aqil both contracted the coronavirus within days of each other. To get Covid-19 in Iraq means to assume responsibility for yourself, she says. The situation in the hospitals is simply too dire.
Iraq’s numbers have been spiking — it has recorded over 390,000 cases and 9,600 deaths from the virus. The country’s medical infrastructure, decimated from decades of sanctions, corruption and war, is hardly able to keep up, and health care workers say they lack personal protective equipment.
Ussayid had to care for both his mother and stepfather, alongside an incredible effort from friends, family and neighbors. When Aqil needed supplemental oxygen it was delivered by a young doctor. Others brought cooked meals. Ussayid went to the grocery store on his bike, had to sanitize the house, press fresh fruit juice, and stay away from the people he loved the most.
He would talk to Nahla through the window, asking when he could hug her and kiss her again.
She was terrified Ussayid would also catch Covid-19 and go through the same pain she was in, which made her cry out for her deceased mother. He would have been unable to express that pain.
“I always say there is a positive side of any struggle.” Nahla says. “The positive side is that we discovered that my son has more capabilities than what we thought.”
She can sit with him now, hug him, reassure him that she is ok. But the disease brought the darkness back into their lives.
I’ll never forget the day I met Nahla. It was 2007 and her husband — Ussayid’s father — had been killed in a car bomb, one of many that barely made the news back then.
Nahla al-Nadawi worked as a radio host in Iraq when her husband was killed in a car bomb in 2007. Her autistic son, Ussayid, was six years old at the time.
Her cheeks were hollowed, her long black hair, streaked by a few strands of white, tightly pulled back. She spoke in measured tones about being in the morgue, seeing a little girl’s body covered in a blue sheet, at one end pigtails poking out with red ribbons, at the other a tiny foot. She reflected on that family’s loss, on all that Iraq had lost.
Love in conflict: A car bomb ruined her life. Or so she thought 01:57
I remember how Nahla’s pain radiated off her. It was soft and elegant despite being so unspeakably profound.
She told us about having to identify her husband’s body from a charred mess of nine other corpses, and how surreal it was to recognize the man who was the love of her life from a photograph of his blackened teeth and a surgical pin in his knee.
Their son Ussayid, which means little lion, was just six years old at the time. She told him Daddy was traveling.
There is a sentence she said then that has remained carved in my mind. Words eloquently strung together, so emotive in their simplicity: “Truly, life was in color and now it’s in black and white.”
The color black has crept back into Ussayid’s drawings. Nahla believes that her son has carried that darkness with him since his father’s death.
When I saw Nahla again, four years later, she looked utterly transformed. She radiated life. She told us how she loved life, loved all that is alive. How when she drops someone off, she will touch the seat of the car to feel the heat of their body. And she spoke with such pride about Ussayid who had just transferred out of a special needs school and into a normal one.
But inside, she said, she still felt like that woman we had first met, and Ussayid, despite his bubbly exterior, still carried a darkness inside because of the death of his father. A darkness that came out in his drawings. Landscapes like a cloud with rain that he would paint over in black.
After years of tirelessly raising Ussayid on her own, and helping him through his emotional turmoil, Nahla would fall in love again and remarry.
“We went through such efforts. It was such a long road for Ussayid to reach colors and happiness,” Nahla tells me on our video call. “Corona(virus) brought the black back into his drawings.”
It’s crushing. And yet that, in so many ways, is the story of Iraq. A nation whose history is more defined by death and bloodshed than the beauty of its people, the beauty of people like Nahla fighting for her son, her family, her country’s soul. Fighting against the darkness.
“I want to tell you something,” she says. “We are saving each other by uniting during Covid-19 and not looking towards the government. We could possibly emerge from coronavirus with a great lesson, that we should all be united to find the beginning of a path of light.”
Related Topics:
Up Next

Lebanon’s uprising never wanted power. Then a blast ripped through Beirut and everything changed